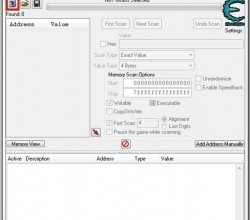 Cheat Engine is an open source tool designed to help you with modifying games so you can make them harder or easier depending on your preference(e.g: Find that 100hp is too easy, try playing a game with a max of 1 HP), but also contains other usefull tools to help debugging games and even normal applications.

It comes with a Memory Scanner to quickly scan for variables used within a game and allow you to change them, but it also comes with a debugger, disassembler, assembler, speedhack, trainer maker, direct 3D manipulation tools, system inspection tools and more.

For new users it is recommended to go through the tutorial(The one that comes with Cheat Engine, you can find it in your programs list after installing) and at least reach step 5 for basic understanding of the usage of Cheat Engine.

It searches for values input by the user with a wide variety of options such as "Unknown Initial Value" and "Decreased Value" scans. Cheat Engine can also create standalone trainers which function on their own without Cheat Engine. Cheat Engine can also view the disassembled memory of a process and make alterations to give the user advantages such as infinite health, time or ammunition. It also has some Direct3D manipulation tools, allowing you to see through walls, zoom in/out and with some advanced configuration allows Cheat Engine to move the mouse for you to get a certain texture into the center of the screen.

# Added a structure spider which may help in finding ways to distinguish between two objects
# Value scanning can now take formulas
# Added a form designer to create lua extensions
# Added an automated trainer generator that will generate a trainer script for you
# Added lots and lots of new functions to the lua engine. Check the helpfile or main.lua
# Added the ability to save binary files into a cheat table
# Added an xm-player
# Added columns to the stackview window
# Added an option to choose if the disassembler should show 32-bit or 64-bit code
# Added support to translate cheat engine to any language you want (check the language folder for more info)
# Some speed improvements at several tools
# Added undo last edit (ctrl+z) when editing values in a cheat table
# Added extra option to the pointer rescan so you can filter out paths more specifically
# Added custom comments to the assembler window
# Added the ability to use lua variables inside auto assembler ( $luavariable )
# Added syntax highlighting to lua
# Changed the lua dlls with versions that don't need the C++ runtime installed
# Changed the lua library to support 64-bit dll's
# The lua script has been moved from the comments window to it's own menu on top
# In the hexadecimal view when selecting 4 bytes and then pressing space will make you go there. Backspace returns
# Added the .cetrainer file extension so you can download very small files and have great trainers