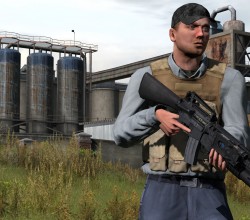 A 225 km2 open world post-soviet state and one of the areas hit by a new and presently unknown infection which has wiped out most of the world's population. You are one of the few who have survived and now you must search this new wasteland in order to fight for your life against what is left of the indigenous population, now infected with the disease.

Go Solo, team up with friends or take on the world as you choose your path in this brutal and chilling landscape using whatever means you stumble upon to survive.

Realistic "Zombies" with custom animations - These once human creatures will act and behave as if they have a heighten sense of hearing and smell but less sight, on top of that they use motion captured animations such as walking and eating from your unconscious body. If you look into any built up area you'll see them walking around waiting for their next victim which dares to venture in.

New weapons and vehicles! - Ever felt like you needed a Crossbow? Or maybe a less military like weapon? If you have then this is perfect for you as we have both of these created to high quality standards all ready for your use in this wasteland. On top of that you can even pick up the bolts fired from the Crossbow to reuse! Not only that we also have created custom vehicles which can be repaired and ridden around to show the world what you're made of!

Custom Medical System - ArmA II's magic medic feature is a thing of the past with this medical system - If you get shot, expect to bleed and to lose blood until you're bandaged up. Lost too much blood? Then expect to fall over unconscious. If you get shot in the leg then you won't be able to walk until you get morphine so you can man up. Pain is also a factor taken into consideration so without pain killers after taking an injury you'll continue to shake. This is medical at it's best!

Persistent Server - Fed up of spending so many hours working towards a goal or finding supplies and then the server crashes on you losing all your progress? Well with the DayZ server all stat's are saved to our external database so where ever you log off, whatever you have will be keep on you next time you come back in. This means you can spend however long you want doing what you want to do. As long as you don't die during the night!

Tons of new objects - We haven't just added in big things like weapons, we take pride in little details so expect to find things such as water canteens, a number of canned foods, junk and car parts (Along with more!) each of which have their own models, textures and UI imagery, once again all created to that high quality you expect in a full scale modification and we're sure you won't be disappointed with it. Nothing has been rushed.

Hunting and Survival - Eating and drinking is a core part of gameplay, you can tell if you need something by a very subtle GUI which doesn't effect the atmosphere, and if you don't fulfil those needs. You'll die. Wandering animals can killed and gutted (with the right tools) to gain access to their meat which can be eaten so you live longer but also to gain blood. For once these animals actually have a use.

Heavy Optimisation - The DayZ server has been designed to give the best play possible. Custom coding and edits have created a smooth running world which can easily have thousands of zombies spawned at once!